A Promising Stock for 2015: Herman Miller

The furniture maker is taking advantage of a growing economy. 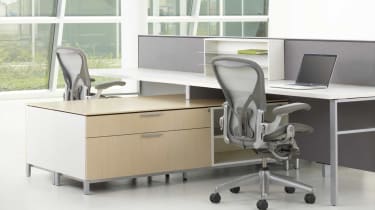 Every time you hear another good jobs report, just think of all of the newly employed who will need a place to sit at the office. That’s good news for Herman Miller, which designs and manufactures office furniture—including the iconic Aeron office chair on display in countless executive suites and in the permanent collection of the Museum of Modern Art, in New York City.

Office furniture sales in the U.S. will grow by nearly 8% in 2015, according to trade group estimates. Herman Miller is also expanding and diversifying its product line, most recently with last July’s acquisition of Design Within Reach, a consumer-focused retailer that sells upscale modern-design furnishings.

Miller’s profit margins are widening as the company’s most profitable product lines account for more of its overall sales mix in an improving economy. Also, Miller will reap the benefits of tighter cost controls and more-efficient distribution channels as sales ramp up.

*Based on estimated fiscal 2015 earnings